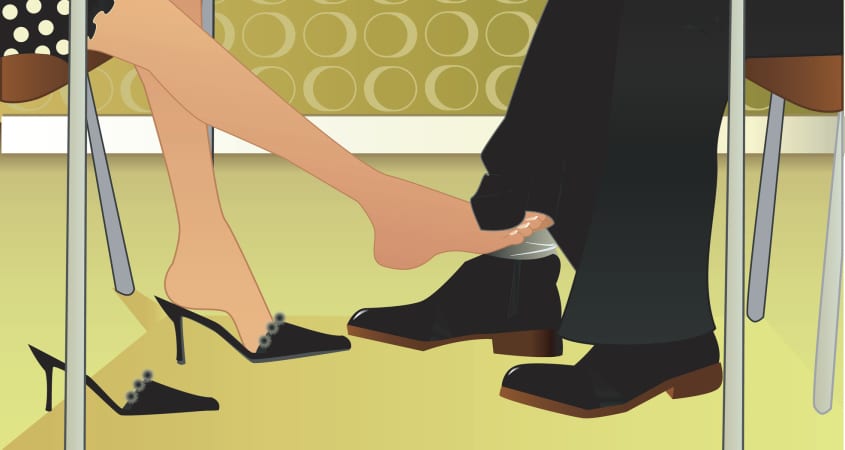 Imagine that, during a quiet evening at home watching a movie with your romantic partner, you feel intense sexual desire and sensually put a hand on your partner’s thigh. Your partner does not respond and blithely continues to watch the movie… Is your partner truly not interested in sexual activity, or did she/he simply miss your cue?

So begins a new paper, published in the Journal of Social and Personal Relationships, that explores how accurate heterosexual people are at judging their partner’s attempts to initiate sex – in terms of their ability to the spot their partner’s cues, and also their overall impression of how often their partner makes sexual advances. It’s important, because as the researchers, led by Kiersten Dobson at the University of Western Ontario in Canada, note, “Sexual satisfaction is associated with relationship happiness, whereas sexual dissatisfaction is associated with relationship dissolution.”

Other studies have found that in casual, short-term relationships, men tend to overestimate a partner’s sexual interest (while women either underestimate it, or show no bias either way; they’re fairly accurate). An evolutionary psychology explanation for a male tendency to think women are more interested than they actually are is that – in a casual relationship – while incorrectly perceiving interest and being rejected might not feel great, missing the signs of interest, and so a chance to mate, is worse.

To explore what happens in longer-term relationships, the researchers recruited 120 heterosexual couples aged 18-51 (but with a mean age of 22), who had been together for between three months and 30 years.

Next, they read short descriptions of 29 behaviours that might indicate sexual interest (such as “I put my hand on my partner’s thigh”) and were asked to rate the degree to which they and they partner use each of these behaviours to indicate that they are interested in having sex. The participants also completed questionnaire assessments of their sexual satisfaction and love for their partner.

The results showed that both men and women were pretty good at identifying the behaviours that their own partners use to indicate that they’d like to have sex. However, on average, the women overestimated the number of times that their partner tried to initiate sex, whereas the men got it about right.

A second, similar, confirmatory study, involving the other 60 couples, found that the participants were again pretty good at recognising the behaviours that their own partner uses to indicate interest in having sex. In this group, the women also thought that their partners made more sexual advances than they actually did (according to the partner data), but only marginally. However, the men underestimated their partner’s advances.

Again from an evolutionary psychology perspective, the researchers speculate that for men in a long-term relationship, compared with a casual one, the costs associated with missing the signs of sexual interest may be lower (as there will be plenty more opportunities to have sex) and the costs of rejection will be higher (as being rejected by a long-term partner could be more painful). But as the results from the two studies were in part inconsistent, more work is needed before any firm conclusions on bias can be drawn, they note.