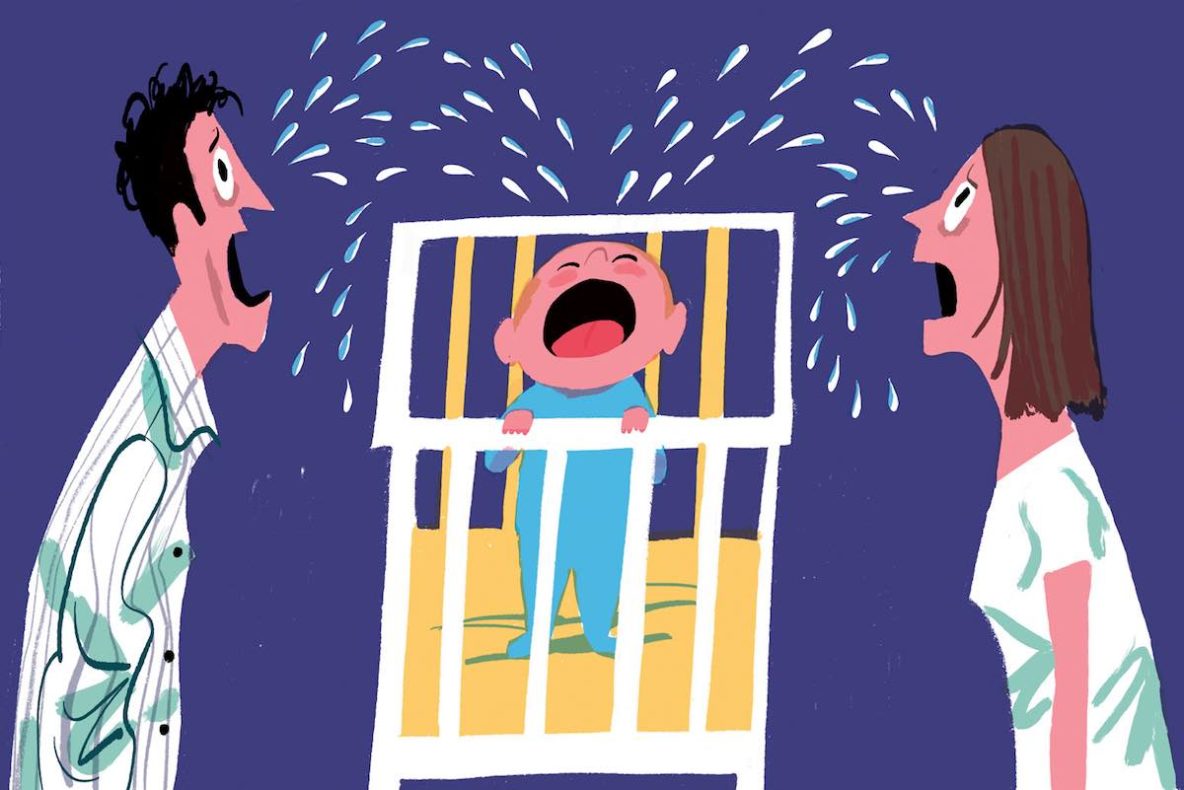 It was 3:24 a.m. when my wife finally lost her cool as the indignant screams of our 1-year-old son came from the baby monitor for what must’ve been the third time that night.

“What’re you doing?” she yelled as I swung my legs out of bed.

“I’m going to put him back to sleep,” I said. Of course, she knew that already. We’d been waking up multiple times a night for the last three months.

“No you’re not!” My wife threw back the covers. “Just let him cry.”

But I couldn’t “just let him cry.” Something about my son’s screams compelled me to go comfort him. What if he’s hungry? I thought. Or he needs a diaper change? Or, worst of all, what if he really misses me?

“We have to teach him good sleep habits.” My wife jumped out of bed, standing between me and the door like Gandalf on the bridge. YOU SHALL NOT PASS. I tried to spin past her but she grabbed my leg, holding on for dear life as I shuffled to the kitchen.

Our younger son had always been an easy baby by day, but an absolute terror by night. He would fall asleep just fine at bedtime, then wake up yelling like a banshee every three hours.

We chalked it up to food allergies. At 6 months, our son had fallen off the growth chart thanks to previously undiagnosed allergies to eggs, nuts and dairy products. To get him growing again, we fed him anytime he wanted the bottle. And he wanted the bottle a lot, especially after dark: we’d wake up three or four times a night to our son’s cries; he’d suck down eight ounces of soy formula, then fall right back asleep.

Over the next six months, our child climbed back up the growth chart until our pediatrician suggested cutting off night feedings. Unfortunately, our son didn’t agree. No matter what we did, he would not sleep through the night. My wife believed in letting him cry. I believed in comforting him with a few pats on the back. It was a constant source of resentment in our relationship.

There was no shortage of sleep advice from our friends and family. “Make his bedroom totally dark.” “Change his nap schedule.” “Stuff him full of food at night.” “Sing him ‘Oh Danny Boy’ 16 times.” We politely ignored most of this. But the one thing most people agreed on was the “cry it out” method.

Some call this sleep training. I call it torture. I could handle the crying for a few minutes, but my son was a stubborn little fellow. He’d cry for what felt like hours and, in our small Chicago apartment, there was no hiding from the screams. Plus, there was always the temptation lurking in the back of my mind that, if I just took five minutes to comfort him, we could all peacefully return to sleep.

My wife was unimpressed by my lack of willpower. “You’re teaching him all the wrong things,” she’d say when I’d go to comfort him. “You’re basically rewarding him for crying.”

I agreed with her during the day but, at night, I just couldn’t stick to the plan. So I’d get up and she’d get mad and, after a month of this, we could barely stand to look at each other. We were both exhausted and angry and either unable or unwilling to control our emotional impulses. We fought a lot about pretty much everything, but mostly we fought about how to get our son to sleep through the night.

Dr. Emily Cook, Ph.D., a couples therapist in private practice in Maryland and the author of “The Marriage Counseling Workbook,” often helps parents like us, who are struggling through a baby’s sleep training. She recommends slowing down when interacting with each other. “It sounds so simple, but it works,” she says. “Take it slow. Listen to each other. Pay attention. Let your partner have their say.”

By slowing down, Dr. Cook believes couples can align even if they have their disagreements. “Agreement means there is a right and wrong,” she says. “Alignment is all about the common goal of the family and I think you both can agree that you want what’s best for your family. In this case, you want your baby to feel safe and loved and to get a full night of sleep.”

Or, you can just pick up and move.

In June, my family relocated to Columbus, Ohio for my wife’s job. With no friends and a lot of free time, my wife and I had no choice but to pay attention to what the other was saying. For better or worse, we were each other’s only friends in our new town, and we started doing some of the things we used to do before we were too tired to do them anymore. We ate dinner together. We put our phones away when talking. We even agreed on a plan for the night ahead so that, when our son woke up screaming, we weren’t each just winging it. I promised to let him cry himself back to sleep if she would turn the monitor volume off.

While we weren’t getting much more sleep, we were happier with each other. And, as our relationship improved over the next two months, so did our son’s sleep habits. He still woke up a few times each night, but he’d cry for no more than ten minutes and then fall back asleep.

One glorious morning, my wife and I woke up to the realization that our younger son had slept through the night. Our joy, while immediate and overwhelming, also turned out to be short-lived, as we soon processed the fact that there was a snoring lump lying between us. Our older son had sneaked into our bed in the middle of the night, an unfortunate habit that he has yet to break. But we would leave that problem for another day, celebrating our small parenting victory with 20 more minutes of uninterrupted sleep.