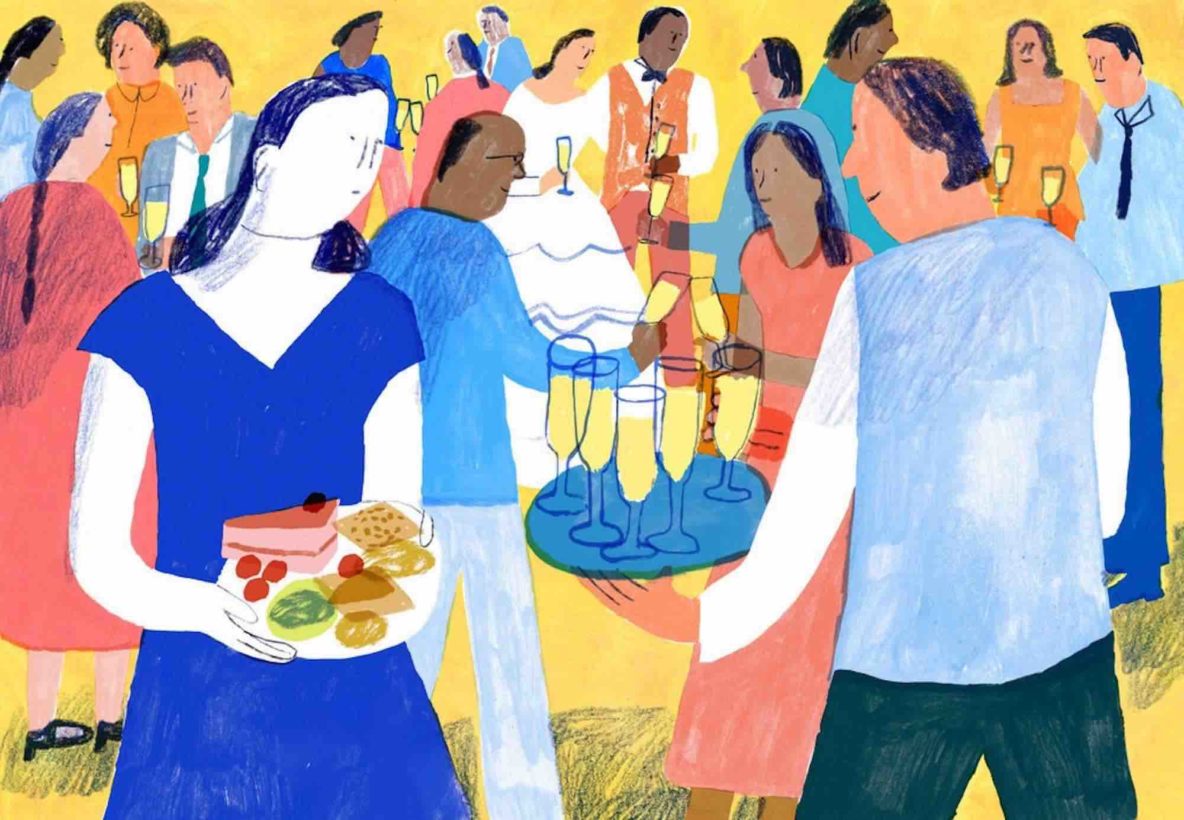 There’s more to weddings than an open bar. It just took giving up alcohol for me to realize it.

Weddings are for partying.

I learned this much at my first wedding reception. I was 6, and a flower girl in my cousin’s bridal party. It was 1996, and I heard songs like “Macarena” and Hootie & the Blowfish’s “Only Wanna Be With You” for the first time. I danced for hours in my pink floor-length dress, emerging sweaty and exuberant at the end of the night.

“I love weddings!” I screamed at my parents as they put me to bed.

Weddings are also an escape from reality, a few fairy-tale hours. As an anxious child, I loved to escape. I lost myself in stories and make believe, creating and retreating into universes that felt safer than my own.

This urge to escape had evolved into a complicated relationship with alcohol. I was a frequent drinker, wrecked by hangovers and anxiety in the days following a night out. So when I turned 28, in September 2017, I quit drinking with the help of a therapist. I worried about things like dating without alcohol and sharing my decision to get sober with friends and family. Soon enough the benefits outweighed the fears. I was sleeping better, experiencing less anxiety, and relishing hangover-free weekends. Still, I had seven weddings scheduled in the next 12 months, all without a plus-one.

For me, weddings had always provided a free pass to over drink. Open bars and Champagne toasts meant that even “normal” drinkers imbibed more than usual. I couldn’t imagine what a sober wedding would look like, or how it could possibly be fun.

My first sober wedding — a few weeks later, in November — was a black-tie affair in New York City. As I entered the hotel alone, I felt like a baby deer learning how to walk. I was genuinely looking forward to celebrating the bride and groom, but my sobriety felt like a shameful secret. At cocktail hour, I filled my hands with food; heaping plates of cheese and passed appetizers, anything to give me an excuse to apologetically shake my head when a server appeared at my elbow with a tray of Champagne glasses.

When the doors to dinner opened, I went straight to the bar purely out of habit. I had noticed that most of the drinks at cocktail hour were being served in tumblers, while a noticeably pregnant woman was sipping on a club soda out of a taller glass. “Club soda in a tumbler glass with lime, please.” The thought of anyone asking me why I wasn’t drinking was unfathomable. Faking I was drinking was better than risking someone asking me why I wasn’t.

A few months later, in January 2018, I flew to wedding No. 2. It was a destination wedding in Puerto Rico, where two college friends would exchange vows on the beach. This time, I decided to try a new approach to sober weddings: being the very best guest in attendance. I listened carefully to the vows, took my seat at the appropriate time for dinner, and laughed at the right moments during speeches. I danced with the bride, ate wedding cake and spontaneously jumped in the pool with other guests at the end of the night. As I drifted to sleep with damp hair and a full stomach, I felt proud of myself. I had been a fun wedding guest, even without alcohol, and surely that had to count for something.

The next morning, the bride confessed that she drank too many glasses of Champagne and her memory of the end of the night was a blur. She didn’t remember much from the dance floor, the cake, or the late-night swim. I was disappointed. I had been so focused on being a “good” wedding guest, but did it matter if the bride didn’t remember it? And was the point of weddings actually to please the bride and groom? I was unconvinced.Wedding No. 3 was another black-tie celebration in New York City. I was six months sober, wore a silver dress, and caffeinated beforehand to help me stay awake through the after-party. I watched the ceremony and felt genuinely happy for one of my closest friends. I also felt very single. After the ceremony ended, I ran into a friend of the groom with whom I had gone on an uneventful first date months earlier. We’ll call him Jake. I exchanged polite pleasantries with Jake before continuing into the cocktail hour.

An hour later, after spending some very intimate time on the dance floor with the bride’s younger cousin, Jake was at my table asking me to dance. In an alternate universe, I might have marched over to the bar with Jake after that first dance and engaged in an unspoken competition with his first dance partner to temporarily abate my feelings of loneliness. But as we danced, I felt uncomfortably aware of the reality of the situation. Fleeting attention from Jake wasn’t going to fill the larger romantic void in my life. I excused myself after the song ended and took refuge in the bathroom, my new safe haven at weddings. I looked at myself in the mirror, and knew I was deluding myself into thinking that validation from Jake would have any long-term impact.

Much like alcohol before it, it would only be a temporary fix. Luckily, when I got back from the bathroom Jake had already moved on and was back on the dance floor with his original partner. I ate cake with my friends and later fell asleep feeling relieved that I had successfully avoided waking up with an emotional or physical hangover the following morning.

The months between June and September are commonly referred to as wedding season, and my summer calendar matched the description. Weddings four through seven were packed into three months, in what ultimately became a sober-wedding boot camp. I put my new tools to the test: caffeinating before the ceremony and hiding out in the bathroom when I needed a few minutes to regroup or text a friend for support.

I also developed a new survival mechanism: Stick to the schedule. Unlike other parties, weddings provide a structured course of events that can be tremendously comforting when you feel out of place. There is a predetermined time for watching the ceremony, eating dinner, dancing, having your cake and going home. As I relaxed into this flow, I started to notice a few new things around me. It seemed like everyone was in their own world, experiencing their own versions of the night. I listened to a bridesmaid worry about the way her dress looked in photographs, while a sick guest downed cold medicine to get through the night.

It turned out I was not contractually obligated to have the most fun, or be the last one on the dance floor.

These observations removed some of my self-imposed pressure. At wedding No. 4 in upstate New York, I wanted to leave early, so I slipped out quietly and didn’t beat myself up for it. It turned out I was not contractually obligated to have the most fun, or be the last one on the dance floor. And when I stopped focusing on how I looked to everyone else, I was also able to be somewhat thoughtful and aware of other peoples’ needs. At wedding No. 5, in Oregon, I spent time with a pregnant friend who was sitting alone while most of her table danced. When a good friend and groomsman had too much to drink at wedding No. 6, I helped him get back to his hotel room in a thunderstorm. This was a real role reversal; previously, I was the one who needed assistance getting home.

The seventh wedding I attended fell on my one-year sober anniversary. At a cliff-side ceremony in Maine, the clouds rolled in. By the time the sun came out again, my friends were married. As I watched them exchange their first kiss as husband and wife, I realized that I truly didn’t want to escape. For years, I had been approaching weddings as just another night out, a chance to drink and dance with my own inner demons. But it took giving up alcohol to realize what may have been obvious to others all along: weddings are a window into a relationship. With or without alcohol, a wedding can provide a glimpse at the kind of relationship you deserve, or remind you of why you committed to your partner in the first place. It’s a privilege to witness them, and it’s even better to remember them the next day.